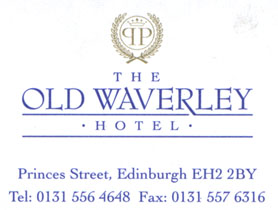 • Pick up mother at the airport
• Girls decide to get dinner unlike what will be available in Scotland... go to Avel’s for tacos and burgers
• Stop by office (mother has never seen it) and watch Seattle earthquake video
• Stop by Barnes & Noble, pick up one last bunch of books
• Did a test car trunk pack... disaster (small trunk).
Finally get a combination of our doublewide suitcase, mother’s large,
and a medium for Gracie and Diane in the trunk,
and a small case for leftovers that goes under Diane’s feet in the car.
• Look at pictures with mother from Washington vacation, and the girl’s reprise their piano recital. 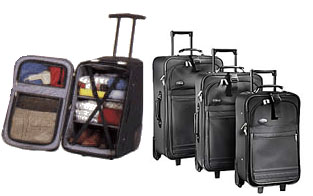 • Lunch at Wimpy’s on the way to DFW

• Hard rain, arrive and park, then haul luggage to United (Gate B30)
•Wander around after check-in
• (People watching: the most interesting was the mother drinking beer and
her two Shirley Temple-like clog dancing daughters)

• After some yogurt cones, board the 727 to O’Hare.
• Roast beef and Cheese snack
• Plane arrives too early to go to the gate finally we deplane, run from C-25 to C-18
• Board the 777 (huge plane, no leg room)
• Seat back video and GPS maps
• Watch Disney’s ‘The Kid’
• Late Dinner service (chicken)
• Rough flight early on, 600 mph, -70’ outside
• See snow over Manchester
• Egg wraps or turkey sandwiches for breakfast (‘What kind of breakfast is *that*?’ Diane)

• Airbus A321 to Edinburgh with Egg Salad and Salmon sandwiches
• Sat near a rugby team
• We see Snow everywhere
• In Edinburgh, we get off the back of the plane and walk in the cold to the terminal (coats were packed)
• Got the bags (they all made it, on time)
• Clear and cool outside, snow on the ground
• Catch at cab (crammed in) to the hotel
• Bag piper on the corner
• *Stairs* up to hotel lobby
• Room mess up, finally get
• Castle view 505 for mother
• Old family room 301 for us 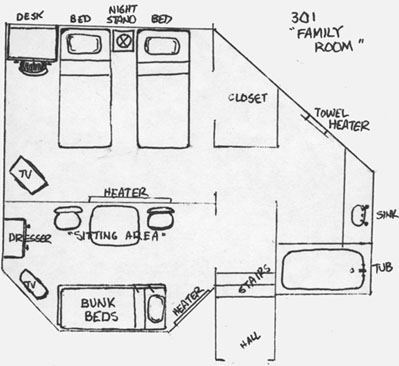 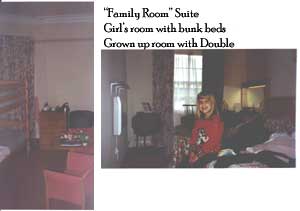 • (4:30) Walk to Information Center
• Walk up High Street portion of the Royal Mile
• Some graffiti, a lot of blackened stone
• Mix of Old buildings and some new
• Lots of pubs and fast-food
• More like Eton than London?
• *Hills*, Old buildings crowded together, but not crowds
• Eat at Baked Potato shop
• One wrap around bench and table
• Joined by a local
• 7:00pm I crash
• 1:00am I wake up, and start writing this journal

• 8:00 Breakfast, including haggis
• 9:00 Walk up the mound, past the assembly house
• (New Scottish Parliament sits here until building finished) 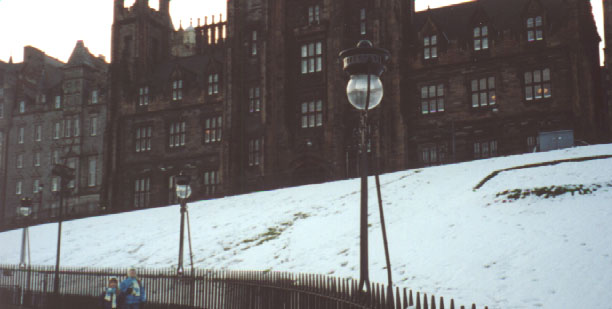 • Up past Ramsey Garden, to the Castle
• Clear but Windy 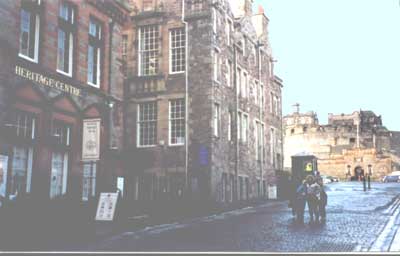 • Down the Royal Mile
• Tartan Mill, outlook tower, Tolbooth Kirk, Gladstone’s land (Closed), and
visit Lady Stair’s house (Writers museum)
• Down George IV Bridge to Grayfriars, Old Parlement and the Royal Museum
• Back to the Royal Mile
• Wander Closes (alleys) St. Giles, Mercat Cross, and then back down Cockburn to Waverly Bridge
and the Scott Monument and across to the hotel. 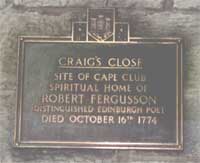 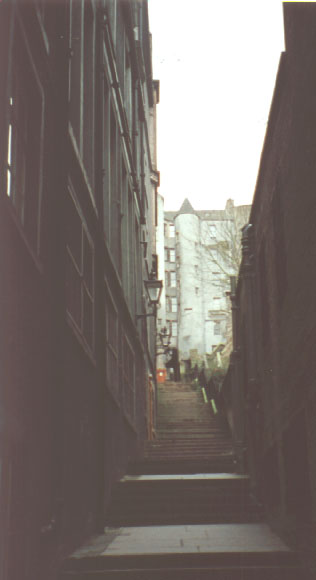 • Strolled down Rose looking for dinner; mostly pubs and closed restaurants
• Ate at Friday’s out of desperation
• Clear night

• After breakfast, booked the bus trip, and then walked the North Bridge to the Royal Mile, past Maubray    house, John Knox House, Huntley Houst, to Holyrood.

• Great view of Calton Hill, the Stuart, Nelson, and Burns monuments, and the ‘Parthenon’ and obelisk.
• Mary, Queen of Scots room, the throne rooms, and the old abbey, then wandered the quadrangle, mews, and court.
• (A little overcast)
• Back up the royal Mile
• past the new Parliament construction site
• Canon Gate Tolbooth and the People’s museum
• Museum of Childhood
• Ate in Lower Aisle of St. Giles
• Quiche, cockaleeky soup, potatoes
• Admired the Thistle roof.
• Back to Waverly bridge to catch double-decker bus to the Britannia
• Rode the upper deck both ways, wild ride)
• Britannia
• huge, but Prince and Queen had single beds in different staterooms
• (windows up high to prevent accidental viewing of the Queen)
• garage with Rolls Royce in it
• tight spaces for crew
• huge dinning and drawing room
• Searched High Street for dinner after Witchery proved too much
• Ate Italian at Caffé Uno (Same chain from Eton two years earlier)
• Hazy Night

• Walked the North Bridge on a ‘dull’ day to High Street to catch bus tour.
• Room for 44, 14 board
• Pass the rugby field and hear about the trouncing by ‘the old enemy’ (England) from Duncan the driver.
• Out past Linlithgow in the beautiful green, with sheep and traces of snow
• Worst winter in 52 years having let up, and slowly warming
• Arrive at Stirling castle about 11:30, and the rain stops as we drive the hills 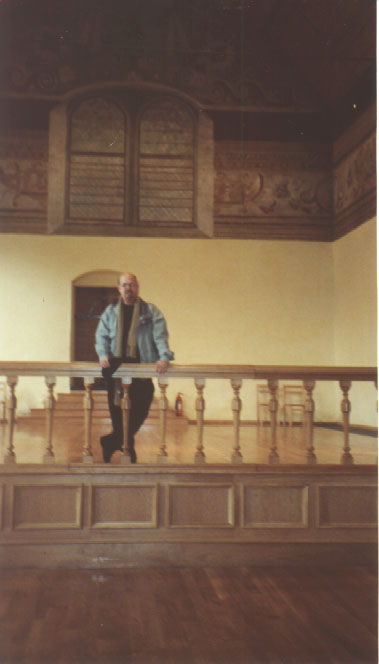 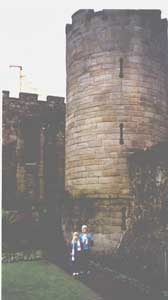 • Skip tour and wander the outer defenses, and the forewall.
• ·Walk from the outer close to the inner close beneath the ‘bridge’ from the Great Hall (newly       refurbished exterior) to the Palace (work in progress), then inside, back to the great hall, out to the       King’s old building and in the chapel. Up to the old kitchens after duncan’s Garden, then to the nether       bailey.
• Snacked at a Costa in the Palace, then reboarded the bus
(almost left without two passengers who joined us from Glasgow)

• 1:30, on to Loch Lomand, occasionally passing wonderful old houses
• (Country of 5 million... 3 million between Edinburgh and Glasgow... and 20 million sheep)
• past a golf course as we near Luss 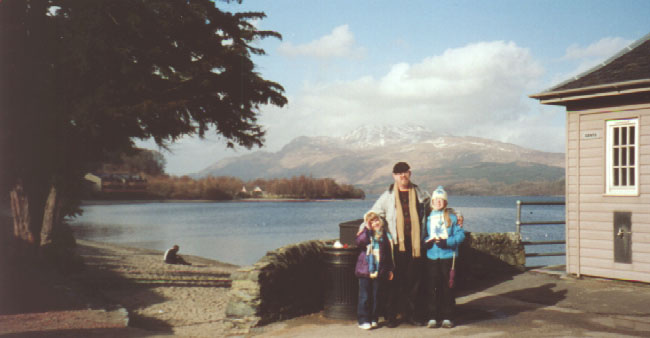 Luss is on the shore, beneath Ben Lomand. Wind through the little village on foot, walk on the windy beach, and return to shop for shortbread, butter tablets and gifts. Back to the bus, and had to wait for the same people.

• Drive near the Trossacks and hear Rob Roy stories as we leave Wallis and Robert the Bruce country.
• Near the Firth of Clyde, we pass the Naval submarine base, then continue through Helensburg,
Dumbarton, and into Glasgow and rid ourselves of our clueless guests.

• 5:15, Driving through Glasgow, we hear stories of great ships built here
(Queen Mary, QE I and QE II, the Britannia) and pass a lot of plain sky scrappers and boring
multifamily homes with a few older points of interest, such as the cathedral. Listen to bagpipe tapes
as we cruise the M8 past the occasional moterway art piece (horse, three faces, the horn, and the 7
sisters sculpted hills... (they are building one more, a shopping cart!)

• Re-enter Edinburgh. Again, a smattering of newer buildings, then the clutter of the older parts...
a welcome sight after Glasgow.

• Missed dinner hours at two places, so after the hiking settled again for Italian at a family restaurant.
• Dropped of the girls and went to an odd Comedy Show, then stopped for Mocha and Hot Chocolate at
the Princes Bar in the Jarvis Hotel before returning at 10:00. 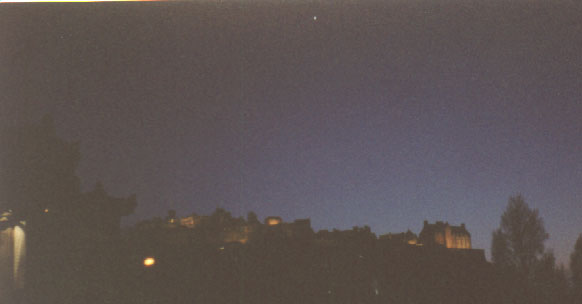 • After Breakfast, climbed the 297 steps up Scotts Monument. Fantastic view of the Forth, the Castle, the city.

• Off to High Street for Brass Rubbings, but they were closed for the season.
• Down the George IV bridge to the Royal Museum, and their worldly collection
• Lunch in the tea room, interrupted by the fire alarm, but returned to eat our sandwiches.
• Scottish museum, with exhibits going back thousands of years, to current.
• The girls played for quite a bit in the Discovery Centre
• Back down Cockburn for pub grub at Princes Mall, a wee bit of shopping the back... to pack 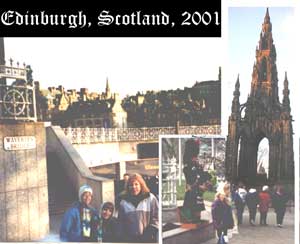 • Leave Edinburgh late, due to fog in London.
• Hustled through Heathrow, then off to Chicago...
‘Oh Brother, where art thou’ and ‘Blond Bombshells’ were the movies watched.
• Uneventful hop to Dallas
• LONG drive home, arriving about 22 hours after getting up.