Friday, we left Waco about 2:10, and stopped for dinner with Susann's aunt Peggy and family in Oklahoma City. Knowing we wouldn't make Kansas City, but wanting to get closer to KC, we headed on up to Wichita, Kansas, arriving just after midnight.

On Saturday, we headed out about 9:00, and arrived at the hotel in Kansas City just after noon. After unpacking, we headed downtown to Crown Plaza and Union Station. Union Station is the second largest train station in the US, and has been very nicely restored. We took the link, a series of air conditioned walk ways around the area, watching parts of the airshow overhead, and decided to have lunch in Crown Plaza, at a place called Fritz's... where the meals are ordered by telephone, and the food is delivered by electric train. Diane models the hat she got there, below. 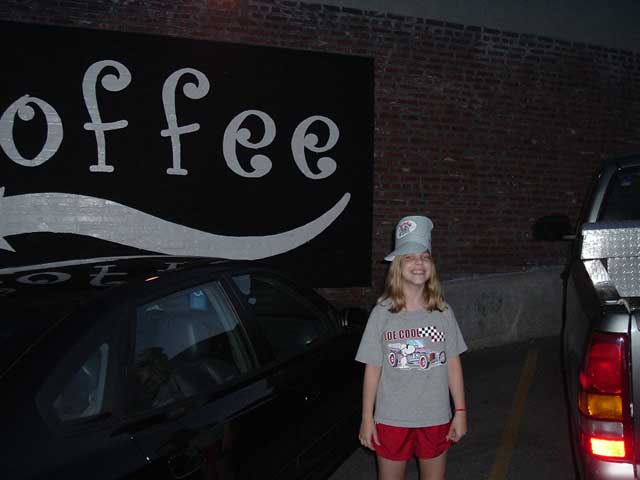 From there, we headed uptown, and toured the Steamboat Arabia museum. The steamboat sunk in 1856 on the Missouri side, but due to the changing river path, was discovered in 1988 in a farmer's field in Kansas, 45 feet down. The upper decks were washed away, but all of the cargo, and hull were perfectly preserved. On display is all the cargo, the boilers, the paddlewheel mechanism, and the last 14 feet of the boat. They say it will take another 15 years to finish cleaning what they recovered, and then they will go back for the rest of the boat itself. 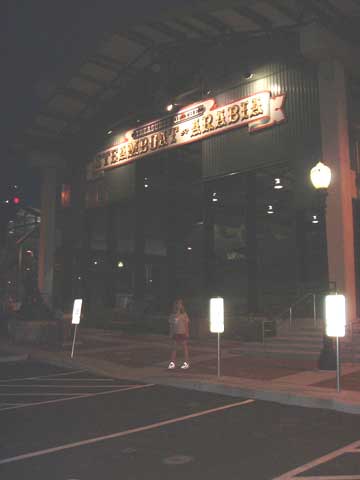 For dinner, we ate at the world famous BBQ hole in the wall Arthur Bryant's. The wait was long, but the food was great. 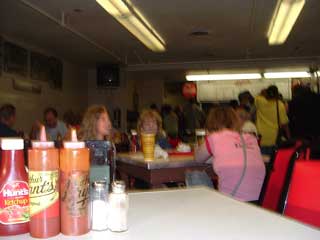 For dessert, we went to a place called Coffee Girls downtown.
From there, we walked across a long bridge to the Lewis and Clark festival on the river, viewed replica keel boats, and saw a malfunction-shortened fireworks display. 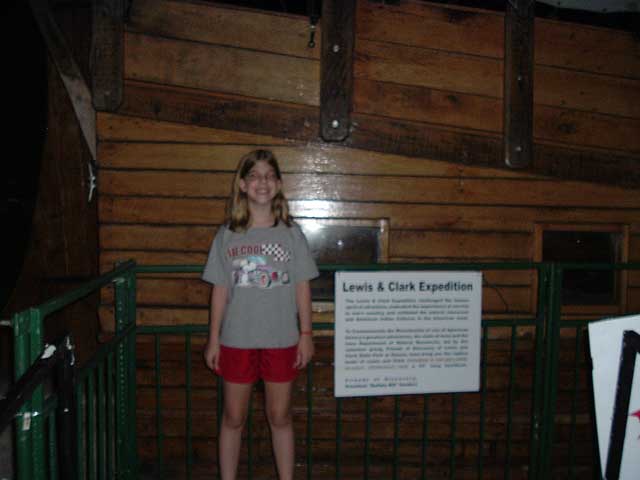 We got back to the hotel about midnight, which was becoming a bit of a habit.
Sunday, July 4th, we went to the Harry S Truman visitors center, saw a great video on Truman and Independence, and then toured his home. His hat is still on the hat rack, and the home is just as he left it, including his 1972 car in the garage. 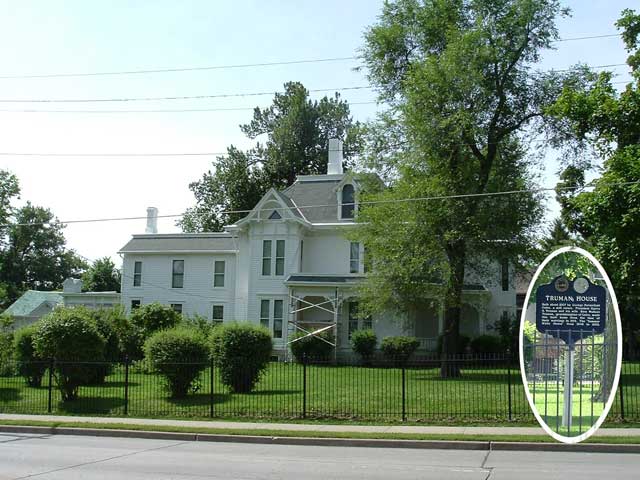 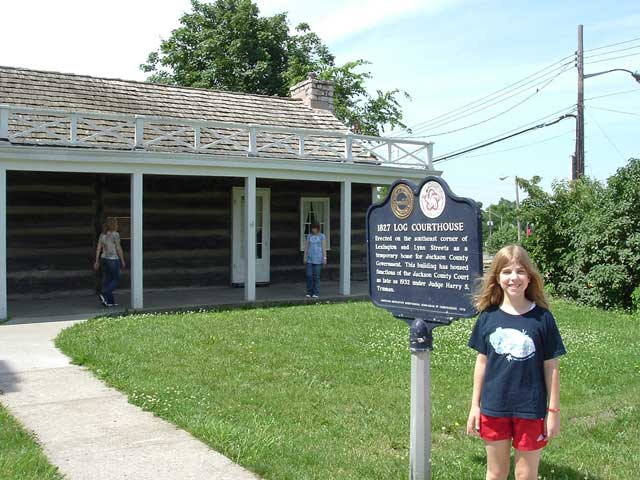 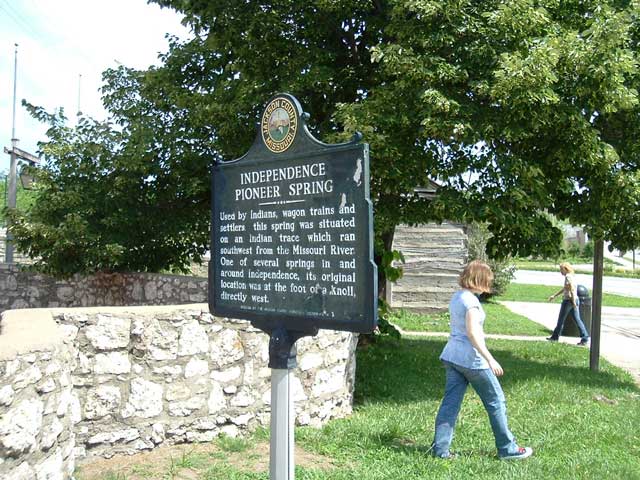 At the Pioneer spring.
We ate German food at the Rhineland Restaurant, and then went to the HST Library. 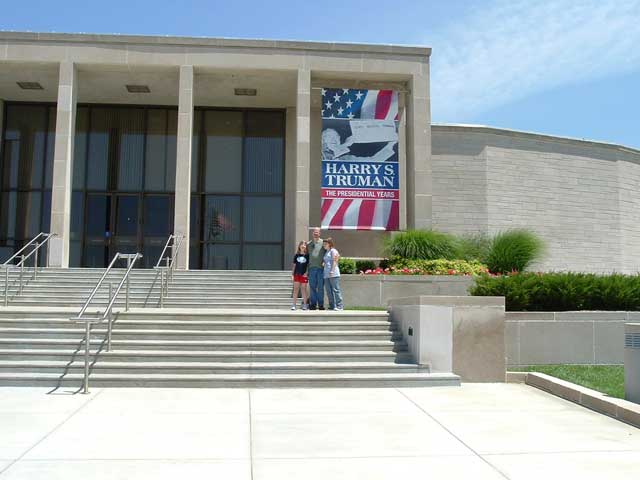 The library and museum had a lot of interesting items, a mock up of the oval office (Truman was the first to use the oval office for his regular work space), as well as his and Bess's graves.
After the HST library, we visited the Vaile Mansion, built in 1881. 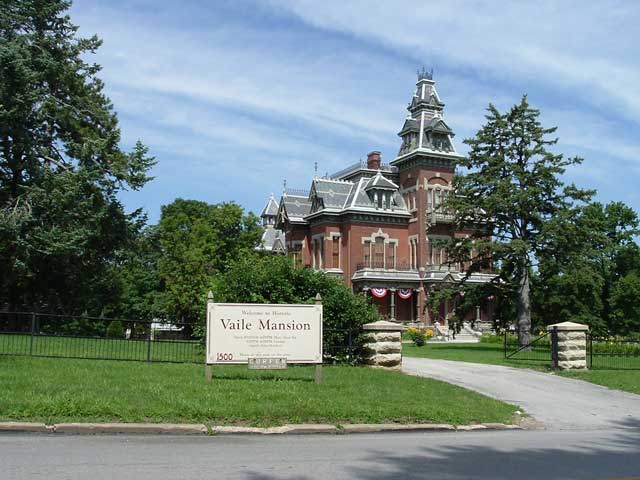 This is a great example of Revival architecture, and was owned by the man who ran most of the Mail for the entire Western US.
The house also served as a nursing home, before becoming a museum in the 1960s.

We grabbed a quick bite at a Hardee’s for dinner, then went to Worlds of Fun amusement park. Diane and I rode almost every ride, and later we all saw probably the best laser shown and fireworks display ever. Around midnight we headed for the hotel... we tried to grab a snack at Denny's near the but they were closed! Oh well.

Monday, July 5, we headed for Lewis and Clark Point. The view was great, we saw some of the airshow planes leaving from the downtown airport, and the girls played in the playground, because... 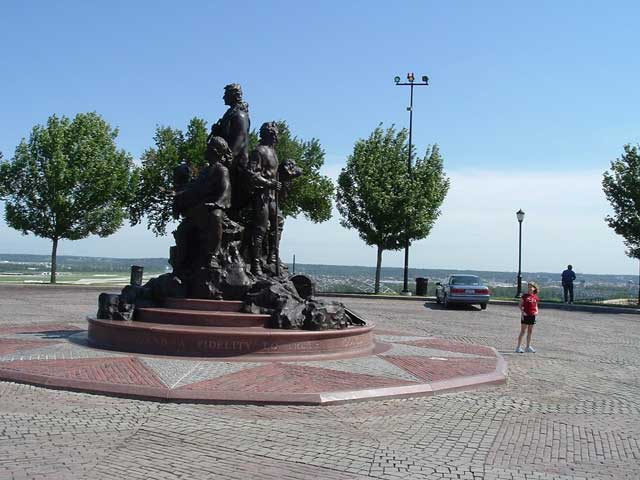 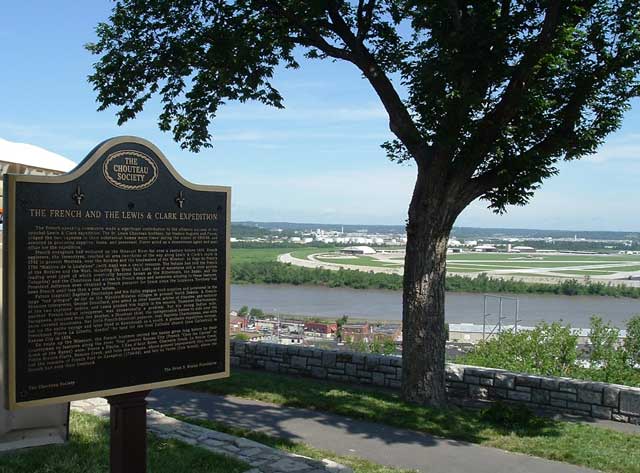 ...as we got there, we noticed the air conditioning had stopped, and that the water temp gauge was maxed out.
The girls played on the playground until the tow truck got there. The local dealer was north of town, so after the drive, we ate at a Perkins Bakery while we waited for a new thermostat to be installed. When we got back, they told us that one of the rear wheel bearings was going bad, too. Not wanting to risk a drive on that, we had that replaced also. Why couldn't these things have happened last month, when the warranty was still in place?! So one week's paycheck ,and 5 hours later, we were back on tour. We went down to the museum district, and wandered around the sculpture garden featuring 4 giant shuttlecock's, 30 headless figures, a totem pole, and lots of modern sculptures (that Gracie didn't care for.) 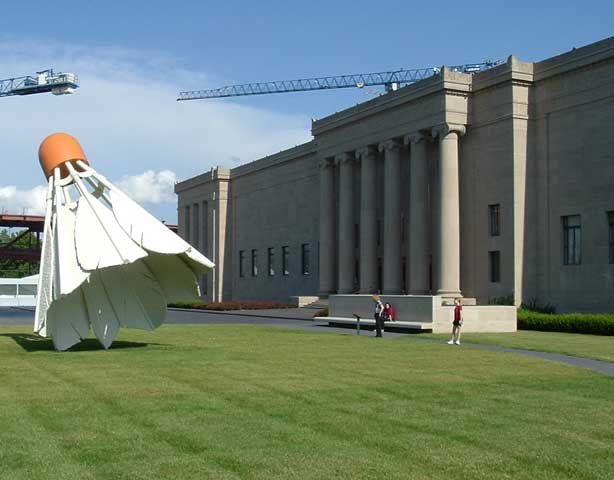 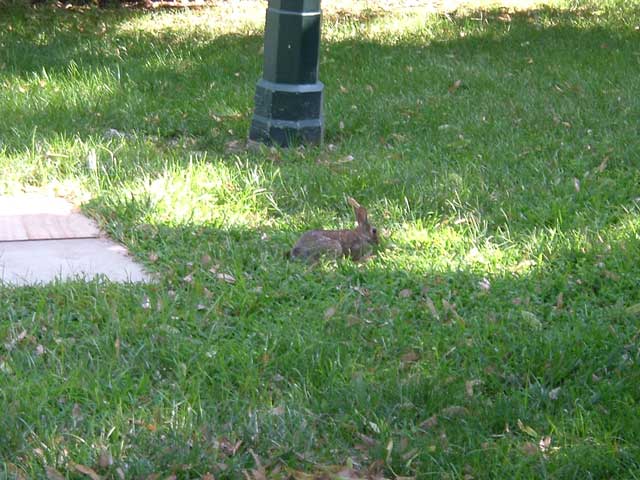 There we also lots of rabbits around the sculpture garden., and right across the street was the location of the Shakespeare festival. 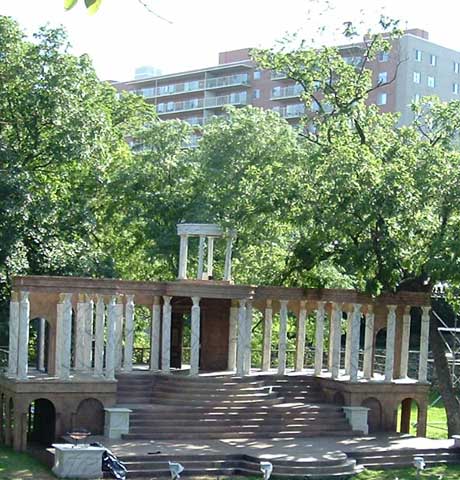 From here, we headed down to the Country Club Plaza shopping and riverwalk area. 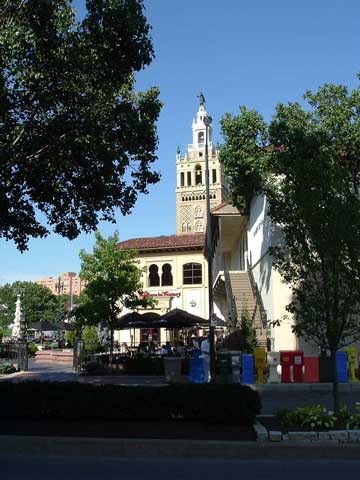 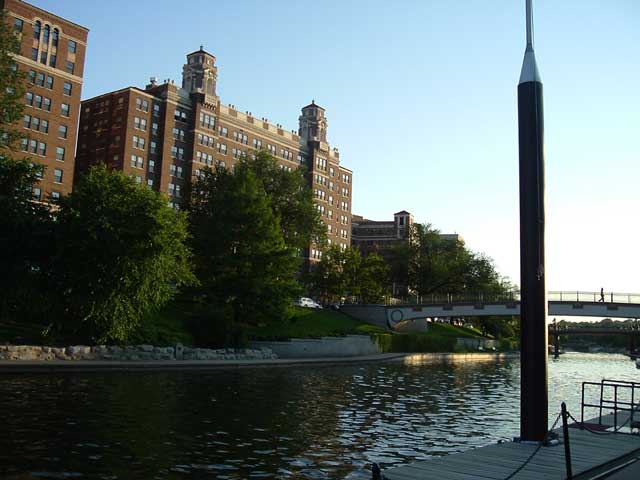 After strolling along the Riverwalk, eating at the Cheesecake Factory, and relaxing at the Barnes and Noble, we headed back to the hotel feeling like we wrapped up the vacation in the perfect place. It was even neat looking at night. 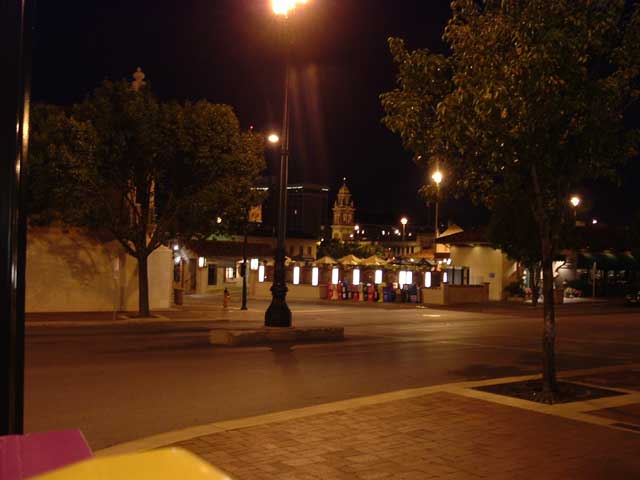 Monday, we ate breakfast at the hotel in Missouri, at lunch in Kansas at Spangles Diner, had dinner again with Susann's aunt and uncle in Oklahoma. 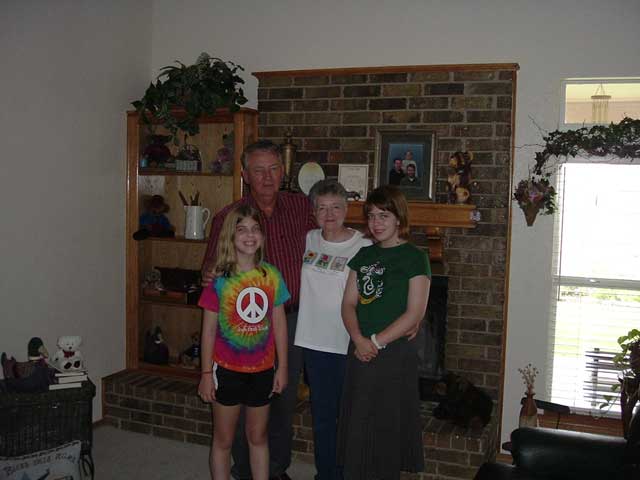 Aside from the Tolls and the car repairs, it was a great trip!
We have a ton more pictures, lots of post cards and brochures, but you'll just have to come by to see those!