Though we had been to Florida during the Summer, In late Fall, my father's condition worsened, so I took another quick trip out to visit... 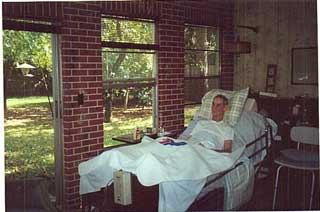 He and Mary Ella said they were holding up well, and both said that we should go ahead and take our planned trip.... so we finalized plans for December.

Transcribed Journal EntriesChristmas Day, December 25, 2001
Have to remove package shelf to get 5 suitcases, 2 backpacks, 2 purses, and 3 carry on's in the 2001 Hyundai Elantra GT.
Depart at 7:00 am, pick up snacks at a convenience store and arrive DFW about 9:00. Slight mix up with boarding passes and thorough screening slow entry into secure area, but sat down to breakfast at Chile's right about 10:00 am.
Board A319 depart 12:15pm.
Arrive IAD (Dulles International, Washington DC) early, buy Belgian Francs ($300 ~ 125000 Bf) and coffee, then board 767 and depart on time again, 5:40 pm.
Watched curse of the Jade Scorpion, dined on Pork/Pasta, and read the Hobbit.

Wednesday, December 26, 2001
7:20 am Arrive BRU on time, after light breakfast, clear customs, claim luggage, and have to abandon first taxi (too small).
Take inadvertent trip to Waterloo and arrive at Holiday Inn City Centre about 9:00, check in, unpack, and explore before lunch in the hotel.
Short nap, and then off to City tour, cold Grand Place, sleepy daughters, and lace factory tour in snow 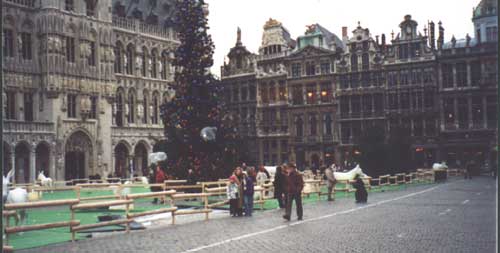 Grab a bite at Quick Hamburger, check out Metro, walk Louise Ave. at night, finish with hot cocoa, then settle in for the night.

Thursday, December 27, 2001
Breakfast in hotel, 'Full European' buffet with eggs, bacon, sliced meats, cheeses and bread.
Purchased Metro tickets, then off to Grand place w/ only one errant subway trip.
Toured the Chocolate (samples) Museum, but Hôtel de Ville was not open.
Lunch in cozy Barock's on square, then off to Museé de Beaux Arts Ancien, in the rain. 15-16 century, then 17-18 century w/ Rubens and Van Dyke.
Walked to the Palace of Justice, then into the metro for dinner, to escape the rain. Pizza much better than pâté, waffles much better w/o chocolate. Back to the hotel and Hot Chocolate.

Friday, December 28, 2001
Breakfast followed by Metro ride to Bruparck! Started with Mini-Europe on a brisk morning, then went to Atomium; once inside the wind and rain hit, and the structure swayed and groaned, and sheets of water hit the windows. 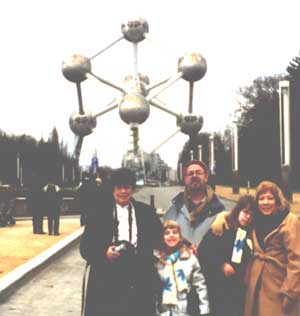 Rode escalators down through 1958 modern furnishings, the went to Bruparck! village for fajitas. We purchased pictures, and then as the sky cleared, headed back to the metro. Got off at Rogier and fought the mall, then off to BCCD, the Horta designed comic book museum.
Then walked up hill to the Botanical Garden (Botanique) at dusk, metro to Louise Station and dinner at Quick. Grabbed some waffles, then ate those with hot chocolate in hotel. A little BBC (cable television) and then turned in.

Drove past the Count's Castle, then to the square. Visited the St. Baaf's Cathedral on the square, saw St. Nicholas, and the Belfry. Went into St. Baaf's, saw the pulpit and wandered. Then on to Bruges. WOW! 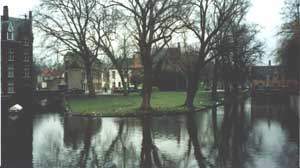 Walked through a convent and then saw lace being made. Then over to Vivalde for stew, 'grandmother's pork', and dessert.
Wandered by the canals to Notre dame, and saw the Michelangelo statue. Then past the Belfry, and the over to the TWO squares, Ice Skating and the Hôtel de Ville. Shopped for chocolate and lace, then returned.

Walked in the snow to the Pizzeria around the corner. Pizza and chocolate cake, then hot chocolate.


Sunday, December 30, 2001
After the usual breakfast, we caught the Metro expertly to Schuman, and walked to Parc Cinquantaire. There was snow falling, snow on the ground, and the park was beautiful. 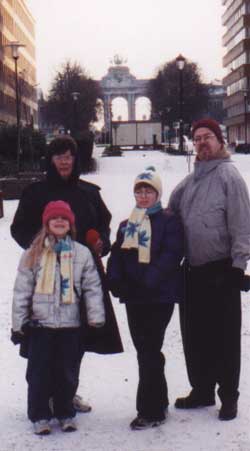 The Arch was closed for a New Year's Euro bash, but the Museé de Histoie opened just as we arrived 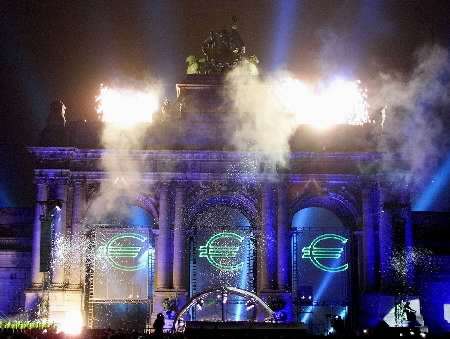 The Arc d' Triumph, New Years Eve, at the roll out of the Euro

. We tour the old clocks, sleds, roman areas, pre-roman areas, and especially like the model of Rome and the model of the Parthenon.
Gracie did no care for the Egyptian mummies or the pre-historic Belgian tombs. Had a fantastic lunch of quiche, and finished up the coins, religious icons, textiles, and more glass. Took about 5:00 to see it all.
Then we went around to AutoWorld, and spend 2 hours among the old European cars, motorcycles, and carriages. Metro back to Louise, then we ate at the Frittery, where we had pita and chicken kabobs, and frittes. I even had a Belgian beer. We stopped by a store and got Belgian chocolate one more time, and ate it in the lobby.
We managed for a van for the morning and started plans to waste our last 500 Bf.
packing took several hours and we planned for a 7:00 breakfast, 8:00 clear out, 8:15 check out, and 8:30 pick up. Airline check in is scheduled for 9:00, plane at 11:55, with 9:05 transit to IAD, 2:19 customs layover, then 8:30ish arrival in DFW.
What a vacation!

Monday, December 31, 2001
Went as planned, though slightly delayed at IAD, and had to switch gates. Finished The first book in the Lord of the Rings Trilogy on the plane. Celebrated the New Year at home, with Sparkling Grape Juice, and crashed after planning for Gracie's 12 birthday celebration.

Friday, January 04, 2002
Learned of my father's death, drove to Baton Rouge the 5th, then on to Orlando the 6th. Visited family and spoke at the memorial the 7th. (We all had recently visited... see Florida 2001 trip)

January 8, we drove to Mobile, and toured the Battleship Alabama, then on to Baton Rouge, and the following day drove to Huntsville, toured the Sam Houston Memorial, and made it back to Waco that night.