After finishing the AoIT professional development training Friday and Saturday, I was to fly out of Waco to Alexandria, just across the Potomac from Washington DC. A hail storm the night before had taken out 38 planes from American's fleet, so I actually was crammed into a limo for the Waco to Dallas leg instead of flying, and grabbed some Chinese food for dinner during the layover.

The 757 left on time, but by the time I got to DCA, then hopped over to the Sheraton, it was already Monday, and it was a lot colder than had been forecast.

The room at the Sheraton.

The bedroom of the suite.

The kitchenette of the suite.

The next morning I met up with some of the folks from NAF for breakfast, and we took the van down to the training site, where we had to wait for someone to come down, and show us where the Cisco training was actually supposed to take place. The training went well, and Cisco had catered sandwiches in, but we did take a break to go acquire some drinks. That night after some time in the gym for me, the NAF and Cisco people piled into various vans and cars, and Cisco treated us to dinner at a place called Bilbo Baggins, where I had some great Southwestern chicken.

It was too cold for the group to go exploring, but after being dropped back at the hotel, I went out exploring on my own until the cold drove me back. 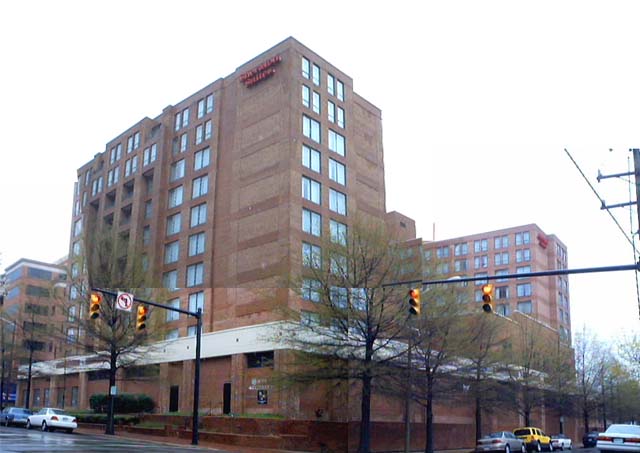 View from the hotel, and ac composite of the hotel area.

Tuesday, we repeated the drill, but the spinach ravioli lunch was a bigger relief, as Cisco was having technical difficulties. That night, the NAF folks bugged out, but the Cisco honcho invited me out with the trainers, and we ate at Chadwick's.

After dinner, we drove the van into DC, and visited the Viet Nam, Lincoln and FDR memorials, and looped around the Capitol, White House, Supreme Court, Library of Congress, and the Smithsonian and the mall.

Wednesday, my birthday, wrapped up early, so I took my camera, and walked around Old Town for a bit.

I walked down Washington, and then over to King, passing the cobblestone streets, the Lee-Fendle House, Christ's Church, the Cherry trees, the Carlyle House park, Torpedo Factory and Marina. I ate lunch at the Chart House, then went past Founder's Park on the River, and Lee's Boyhood Home on the way back to the hotel.

After gathering up my stuff, I took the shuttle to National, caught an earlier flight to DFW, and then had to wait 5 hours until my delayed flight back to Waco was ready, arriving home just before midnight... just in time to get ready to take Gracie to the State Science fair in Arlington!

To the Spring Programs and pictures